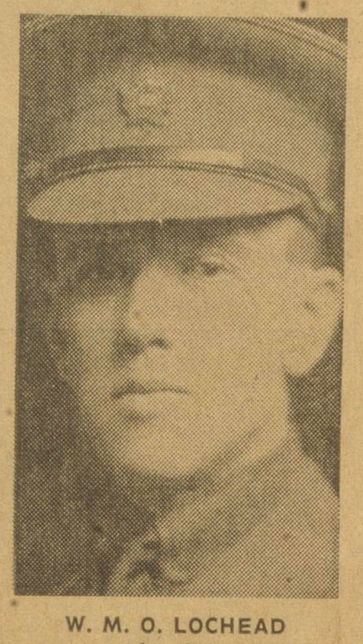 William Merton Overton Lochead was born on 10 January 1874 in Camden Township, Ontario to parents of Scottish decent. When war broke out in 1914, Lochead was living and working in Waterloo County as a manager with the Mutual Life Assurance Company. He was also the president of the Berlin Board of Trade.

The 111th Overseas Battalion was based in Galt, while the 118th Overseas Battalion was recruited from the northern half of Waterloo County, including the city of Berlin. Lochead was promoted to command the 118th, despite the fact that he had barely a year of military service at the time. In the eyes of Militia Minister Sam Hughes, his civic and business accomplishments were just the sort of qualifications required to raise a local battalion.

Lochead faced many challenges getting the 118th up to strength. Local factors included competition from neighboring 111th recruiters, tensions between out-of-town recruits and local citizens, and blowback from his own recruiters’ relentlessly aggressive campaign.

The 118th eventually departed Berlin in May 1916, and sailed for England in January 1917. There, it was was quickly broken up and used for reinforcements to existing units in France and Belgium. As a result, Lochead withdrew from overseas service and returned to Waterloo where he served the remainder of the war as commander of his original unit, the 108th Regiment. He died  in Kitchener, at the age of 86 in 1960.

The Lieutenant Colonel W. Lochead Fonds contain the personal papers of William Merton Overton Lochead, as well as, files on the 118th Battalion. These papers were acquired in the mid-1990s by the Laurier Centre for Military Strategic and Disarmament Studies’ LMH Archive, and cover the 118th Battalion’s existence from 1915 to 1917. The entire collection is digitized and text-searchable.

File 44 Qualifications of Officers and N.C.O.s

File 47A i Transfers